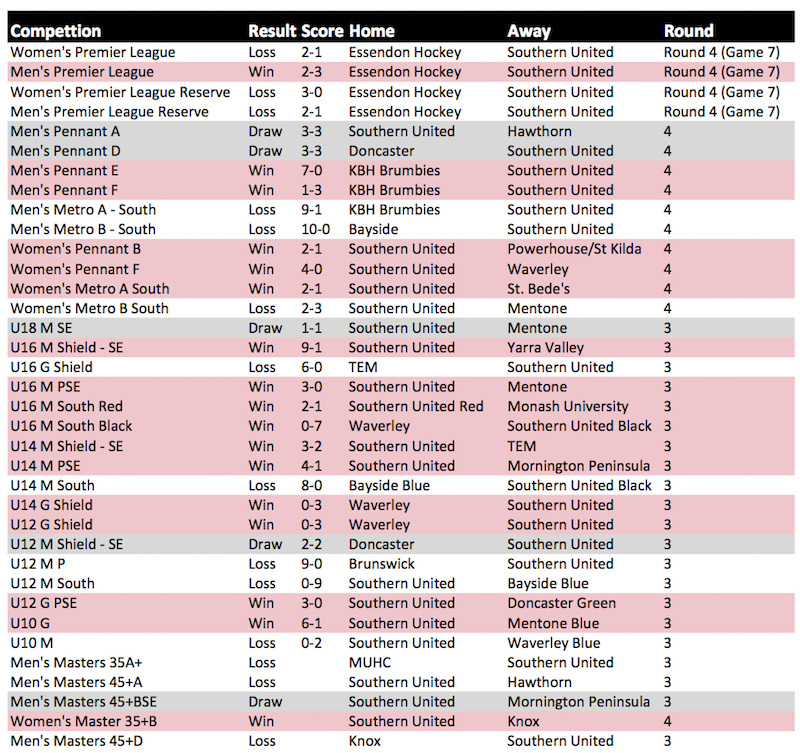 Women’s round was celebrated by all on the weekend. There was pink everywhere! As part of women’s round, a best on ground was awarded to one player in each girls/women’s game.

Winners of the awards for the southern  games were:

The premier league teams played at Essendon on the sand pitch there, and were clearly reminded what a great quality pitch we have at Farm Rd.  The men’s first played a tough game taking the points with a 3-2 win, while the reserves went down 2-1 with  Carlin scoring the one goal.

In pennant A the pennant A guys played Hawthorn for a 3-3 draw with Tim Dale netting two goals. The Pennant E boys played at SNHC in a round where all Pennant E teams played in Parkville. The Pennant E team started strong, up 6-0 at half time, finishing the game 7-0 against Brumbies, pennant F also had a win over Brumbies with a 3-0 scoreline.. Brumbies then achieved their revenge in the Metro A game where Brumbies won 7-1, with the Southern boys scoring on a penalty corner after the whistle.  Metro B also had a tough day going down to Bayside. Pennant D survived a player / goalie crisis when Chris Abaniel stepped in to the goals and the game was  a 3 all draw against Donnie. With 2 PC flick goals to Jelli, 1 tomahawk goal to Ed, together with some great defending supporting Chris. On a penalty corner with the ball over Chris’s head Hugh ran across the back line to do a great save and clear the ball.  Metro B also had a tough day going down to Bayside.

The women had a tough day at Hawthorn with the firsts going down 3-2 and the reserves 3-0. The Pennant F  ladies played Waverley at home in women’s round and finished with a great 4-0 win, while the Pennant B also had a win with a 2-1 win over Powerouse with goals to Elizabeth and Rechelle. The Metro A team played a tough game against St Bede’s and came away with a 2-1 win, while metro B went down to Mentone.

Excitement at Farm Rd on Saturday morning when 18 new Southern United players took to the field for the first round of the Under 10 Quarter Field games – The Northern Sharks Hockey League.  Most of these children have just finished the hook in 2 hockey program the previous week, and took to the pitch for their quarter field games with Mentone and Bayside with huge smiles on their face.

Friday 4.30pm saw the first week of the Under 8 intra club program, once again, the children had just finished the hook in 2 hockey and now moved on. The Under 8s under the care of Phoebe, Warren and other coaches provides a great environment for children to shine learning new hockey skills and play small sided games.

The busy night at Farm Rd on Friday continued with the under 14 mixed shield team coming back from 2-0 down against to take the 3-2 win in a close game with 2 goals to Nick Fitzgerald and 1 to Lachie Paice.. The under 16 mixed shield team followed with a strong 9-1 win against Yarra who have had a tough start to the year.  Under 16 mixed pennant  played Mentone in a repeat of their practice match with different results, with 3-0 win. Goals by Hannes, Marty and Luke D.

At Farm Rd, the under 14 south are continuing a tough fight, going down to Bayside. The Under 14 mixed pennant followed with a 4-1 win over Mornington with Charlie Williams scoring a hat trick. To wrap up a great night for under 16 mixed, Under 16 red south had their first win for the year, over unbeaten Monash 2-1 with a great game from Zoe, and some heroic work from Aden Gartly. Under 16 south black with the bare minimum of 11 players had the fun 9.30 game, …at Waverley, but despite the odds, took the 3 points with a 7-0 win with a great game from all the players and a couple of goals to Ben Thompson.

The under 12 mixed shield travelled to Doncaster for a tense, close  game of hockey that went goal for goal.  Both teams had opportunities, but the result remained as a 2 all draw.  The improvement in the team week by week is significant. The under 12 girls shield team continued their success with a 3-0 win, while the Under 12 girls pennant team had their first win for the season with a 3-0 win over Doncaster.  Under 12 mixed pennant struggled with the traffic to Brunswick, once the full team arrived they fought a tough game to the end, but went down to a more experienced, older side.

The under 10 girls half field had their second win for the season with a 6-1 win over Mentone, while showing that hockey is about team spirit the Southern girls “shared” a player with the Mentone team when Mentone was short. Great work girls (and coaches). While under 10 boys played a tough game going down to Waverley. 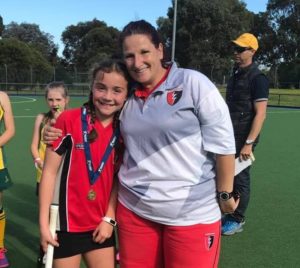 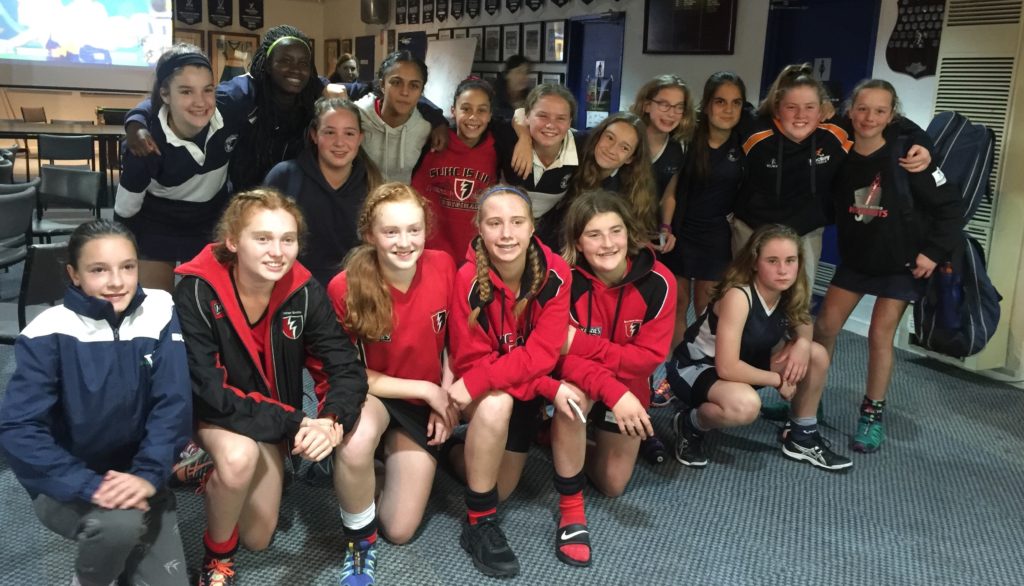 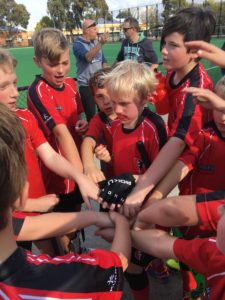 The U12 boys kept on fighting through a tough game. Well done boys. 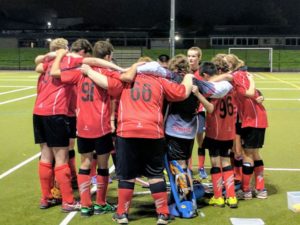 Under 16 South red with their first win for the season 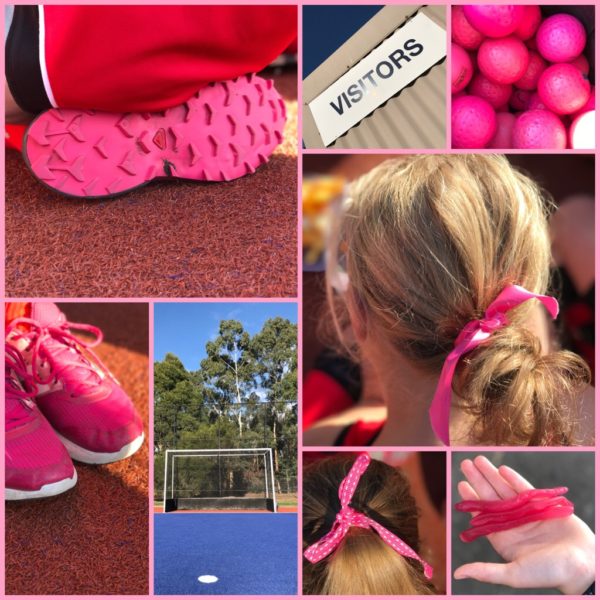