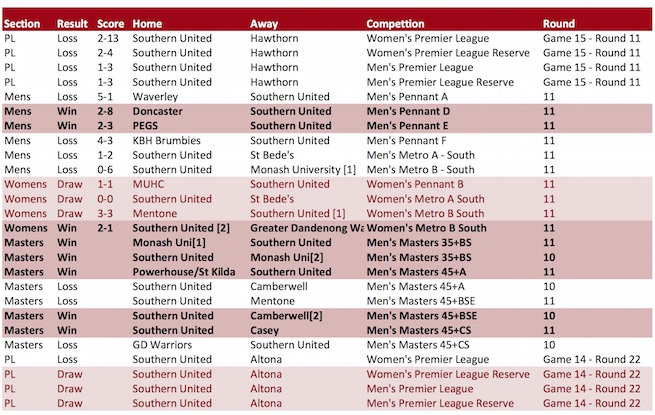 MPL and Reserves   SUHC was host to Hawthorn and after being defeated by them 1-8 and 1-6 in the first game of the season were out to show how much they had improved.  With 4 PL players out playing in the U18 State teams it was always going to be tough.   The PL guys played first and had several opportunities to score but just couldn’t convert until Matt L’Huillier scored from a PC in the 2nd half making the score 1-2. Some great saves by Ed Arnold in goals kept it this way until the last minutes of the game when Hawthorn scored to make it 1-3 at the final whistle.    The Reserves team played well against the top of the ladder Hawthorn and they too went down 1-3 in a very competitive game. Goal to Craig Hardham.  Great to see such improvements in both teams as the season goes on.

Pennant A headed out to HHF to play current bottom of the ladder Waverley.  A very different Waverley team took to the pitch this round and it was game on.  Waverley scored 3 goals in the first 15 minutes putting pressure on the young SUHC team.  They fought back to go down 2-5 but couldn’t match the strength of the Waverley.  Goals to Lachie Eddington and Steve Flack.

Pennant D are working on solidifying their spot in the final four with an 8-2 win over Donny. Goals shared around, including two to Jesse and two to Sam, but the spectacular goal by Sam was the highlight.  1 each also to Pim Okhuizen, Jarnail Singh, Cal Thompson and Con D’Cruz.  Good work by 13 yo Rylan Pease in goals in only his 2nd PD game.

After many very close games resulting in a draw or a small loss, Pennant E travelled to PEGS to play top of the ladder. The scoreline at half time was down 2-0, but once again Southern showing they had form. With 3 goals in the last minutes Southern took 3 points from the competition leaders.  2 goals to Lachie Edwards and 1 to Alasdair Stretch.

Pennant F.  The guys who were sitting on top of the ladder headed out to Elgar Park to take on 4th place KBH Brumbies.  With only 2 points between 1st and 4th it was always going to be a tough game.  KBH came out on top with a 4-3 win.  Goals to Julian Pratt, Dave Fisher & Harry Singh.

MMA took on St Bedes at home.  With the guys sitting 3 points behind 4th spot they needed a win but unfortunately went down 1-2.  Goal was by Jason Bloms.

MMB  were up against top of the ladder and undefeated Monash and went down 0-6.

Women’s Premier League played 2nd placed Hawthorn at home & with a number of players missing on state duty had their first big loss going down 13/2.

Pennant B  had a big game away at MUHC who sit 2nd on the ladder to our 3rd place & due to a number of changes to the team it was expected to be a hard task but the girls played a great game, creating a number of chances & drawing 1/1.

The Metro A team played home to St. Bedes & in patches played some really good hockey, but couldn’t capitalise on their chances with one attack being repelled with the ball on the goal line. Our Defence was rock solid rarely letting the opposition into the D. Draw 0/0

Our Metro B Red team went on the road to Mentone which is always a challenge and had a 3/3 draw & are sitting in 4th place on the ladder. Our Met B white team played home to Dandenong who played a very aggressive style of play but the young players stood up and enjoyed a 2/1 win & sit top of the ladder.