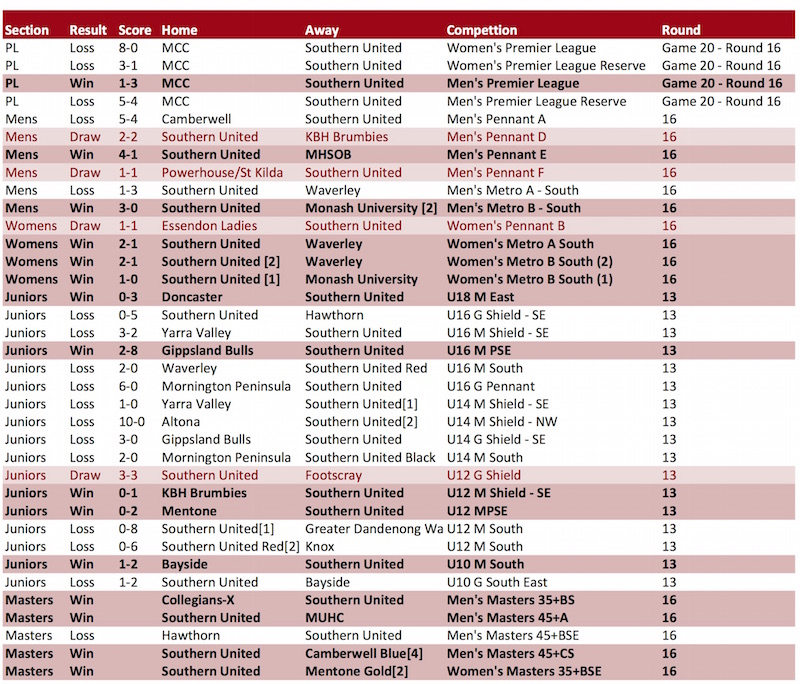 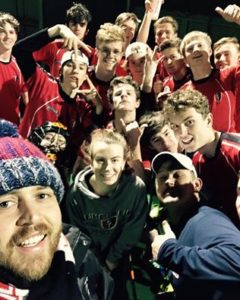 What was a terrible weekend for player availability translated to not the best weekend of results. With only one more round to go the junior ladders are very close.

Under 18 have kept their final hopes alive with a win over Doncaster.  The 4th vs 5th game next week against Burra will be the decider of the final 4. If the 18s can win that they will go ahead of Burra with the calculation of equalisation points.

At Yarra, under 14  mixed shield Se struggled against the Yarra team playing on the Yarra beach, going down 1-0, with help from Ed Fitzgerald from Under 12. The 14s remain in the four with the top four incredibly close, with Doncaster drawing away, and 2 points between the next 3. The Under 16 mixed shield result was similar going down 3-2. The sixteens remain on top of the ladder with only goal difference separating first and second, and three points separating the top 4.

Under 14 girls travelled to Drouin with only 11 players going down 3-0.  The under 16 mixed pennant  trip to Drouin was more successful, for the first vs second on the ladder clash. With Gippsland and Southern equal on the ladder with only score difference separating them it was expected to be very close, but the boys came away with a massive 8-2 win. WOW!!

While Under 14 shield NW played Altona for a tough game. While the under  14 south and 16 girls pennant at Mornington both ended with Mornington taking the points.  With only 9 under 16 girls, thanks Ruby for staying on to play with the older girls.

Under 16 girls shield suffered also from missing players. Thanks to Molly, Issy and Anna who travelled to Drouin, and then came back to Farm Rd to help the older girls. Despite the huge commitment from them (and Deb) the 16 girls went down 5-0 to top of the ladder Hawthorn.

Under 12s on Saturday also suffered from many players unavailable. The under 12 mixed shield played well with Taylor Nel filling in to have a 1-0 win over Brumbies, while under 12 mixed pennant played a great 2-0 win over Mentone.  The under 12 shield are safe on top of the ladder, while pennant have strengthened their third position, with 2nd on the ladder technically possible next week.  Under 12 South black had a tough day against Dandenong.

Under 10 mixed played Bayside in a well contested game with both teams showing how much they have improved over the season. There were some great passages of play with everyone in the team contributing. Hamish scored both goals. While the Under 10 girls  played their hardest but did not quite get their over Bayside.

Pennant D are determined to keep their place in the four. Last time they played Brumbies they went down 8-0, this time the result was reflective of their position on the ladder with a 2-2 draw. 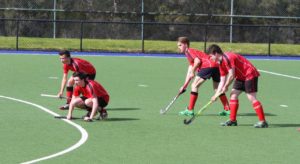 Pennant E the unluckiest team running with so many close games and only one win – against the top team, added another 3 points, this time against fourth on the ladder Melbourne High with a 4-1 win with two goals to Lachie Edwards, and one to Mike Brooks and Alisdair Stretch.

WPL – took on 3rd place MCC at their home ground & came up against a very good side in form going down 8/nil.

WPLR – MCC showing good depth with their reserves also sitting in 3rd place. Our girls had chances that weren’t converted, but came away with a loss 3/1.

WPB – took on a committed Essendon team out at the freeway ground & had a 1/1 draw. Some chances have slipped in the last couple of weeks & the girls now sit in 5th place only 1 point outside the 4.

WMA – had a hard physical game against Waverley at Farm road but the girls worked hard all game to come from behind in a 2/1 win keeping 2nd spot on the ladder.

WMB (red) – in the Big Metro match day at Farm road the Reds took on Monash and had good 1/0 win – strange points equalisation have them 3rd on the ladder.

WMB (white) – played Waverley in the middle of the metro matches and had a strong 2/1 win. Could have been more but for a number of missed chances in the circle, 4th spot on the ladder & can’t be overtaken.