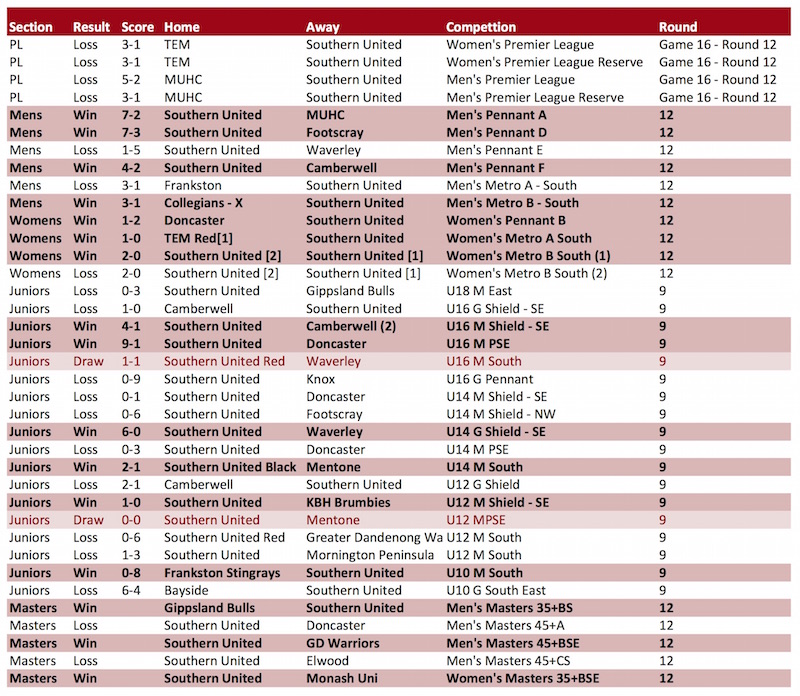 First round back from the break for juniors. As we watch our children play a huge thanks to the many coaches who coach these teams. A special thanks to those that coach a team while their own children are playing elsewhere – Thanks Julie and Lex.

The under 16s having obviously enjoyed the break came back with a vengeance.   The  teams had a good round. The Under 16 Mixed shield  faced long time rivals Camberwell. With Al, Brad, Liv and Amy out playing in Under 18s and  Australian teams, the team had quite a different look, together with Eden playing his first game for Southern. The team and depth of the under 16 talent came to the fore taking the game strongly with a 4-1 win.  The  Under 16 mixed pennant continuing their strong performance with a 9-1 win over Donnie.  Sadly the under 14 mixed Shield SE did not have the same fortune against Doncaster with a very tight game with very few shots on goal, Doncaster managed to steal the ball from a free hit at the 16 and score with a goal hit right/just on the circle taking the 3 points and removing Southern from top of the ladder. A great performance from Lachie up from under 12.

The Under 16 shield girls travelled to Camberwell for a late game with Camberwell coming out ahead 1-0.  Awesome work by the Under 16 South guys to run with Waverley and end up 1-1 at the final whistle. The defenders did a great job to repel the attacks while the inners worked extremely hard to keep up the attack. The half line was also extremely busy as the most of the game was played in the midfield! Great job from Cooper coming back from an injury.

The under 14 girls shield team had a strong win over Waverley with a 6-0 win at Dandenong, with 2 goals scored by Molly and Emily and one to Ile and Izzy. Under 14 South also had their second win of the season over neighbours Mentone.  The U14 Mixed Pennant team played at home against Doncaster – 1st game in 3 weeks after a bye & school holidays.  In the 1st half, Doncaster started the game well scoring 2 goals. In the 2nd half Southern were more attacking and had a number of opportunities at the goals but we weren’t able to convert. At the end of the game, Doncaster won 3-0. It was a game played in good spirits by both sides.

A hard game for the Under 12 south red coming up against a more experienced top of the table Dandenong. Great game from the defenders who worked really hard to stop their attacks as often as they did. Very impressive by the whole team when they pushed forward into attack and supported each other. Everyone tried their hardest and made Dandenong earn every shot they got but in the end Dandenong were just too strong. Good to see Conor got the encouragement award from the Dandenong team for his efforts in goal. Under 12 South Black  played Mornington going down 2-0.

The under 12 mixed shield played Brumbies, to whom they lost last time, but turned the tables for this round with a very close 1-0 win, with Brumbies having most of the attack in the 2nd half.  The under 12 mixed pennant met Mentone.  First game back after school holidays saw the team take the pitch buoyant and ready to go. Both teams were evenly matched and we saw the ball going up and down the field in a rapid succession. The Mentone goalie denied several shots from our attack that were creating great opportunities. Our defenders were standing firm and making life difficult for the Mentone attack who kept pressing whenever they could. The crowd in the grandstand were cheering but to no avail as they couldn’t quite get their team over the line. End result was 0-0 but thoroughly entertaining!

Great 8-0 win for the u10 mixed crew down in sunny Frankston, marking 8 wins in a row for the team.  Hamish Layzell scored fo 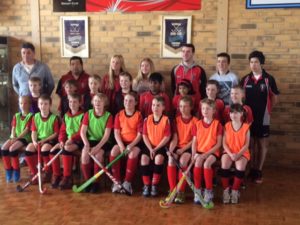 ur goals, and the team did really well to keep the ball on attack for most of the game, with lots of switch plays across the field.

The under 10 1/4 field players are continuing to enjoy the season and improving their skills every week. Photos this week did not capture all the children, but it was great to see so many make it for the photos.

Our Premier League teams played MUHC at the SNHC a ground which historically hasn’t always been good for us.  The Reserves played first and a saved stroke couldn’t stop the guys from going down 1-3.  Our GK’er David Hammond was taken out with a knee to the ribs in the 2nd half and had to leave the field.  Our PL team started off on a good note being 0-2 up at half time, but MUHC came back strongly in the 2nd half and didn’t take long to even the score to 2-2.  The guys played hard but the Uni guys were eyeing off their chance at winning their first game and they gained momentum after slotting in another goal from a stroke.  SUHC went down 2-5.  Goals to Ben Hughes & Matt L’Huillier.

Pennant A also played MUHC at Farm Road.  The guys started well and were 2-0 up before the tables turned and the scoreline was 2-2.  The guys regrouped at half time and came out with guns blazing.  Our guys managed another 5 goals to make it a 7-2 win.  2 goals each to Ben Eddy & Lachie Eddington and 1 each to Nathan Gardiner, Bill Campbell & Jonno Stewart.

Pennant D played Footscray at the SNHC in a 3 v 4 game.  Was always going to be tough but we came away with the 3 points winning 7-3.  Jesse Workman smashing in 4 goals with 1 each to Jarnail Singh, Ben Rogalsky and Con D’Cruz. See the match highlights on our you tube channel at https://youtu.be/9xhUAlmtysQ

Pennant E played Waverley at home.  Waverley were too strong with the guys going down 1-5.

Pennant F took on Camberwell in a fiesty game and came out the winners with a 4-2 result.

Metro A headed to Frankston with a slightly undermanned team.  Frankston were too strong and we went down 1-3.

Metro B  played our friends at Collegians at Monash.  Collegians were too strong with a 2-0 result..

Premier League played TEM’s in what was a close but disappointing game for the girls. TEMS got the win 3/1 in a game that could have gone either way but TEM made the most of their opportunities on the day.

Reserves  in a similar game to the 1’s had our chances but let a good opportunity slip away by going down 3/1 to TEMS who sit bottom of the ladder.

Pennant B continued with their impressive form, scoring an away win against Doncaster 2/1 and now sit in a clear 3rd place on the ladder.

Metro A had more possession for most of the match away against TEM but struggled to capitalise, scoring once to win 1/0.

Metro B (red & white)- the match of the season with both Met B teams coming together at Farm road. In a tight game the Red’s came away with a 2/0 win.