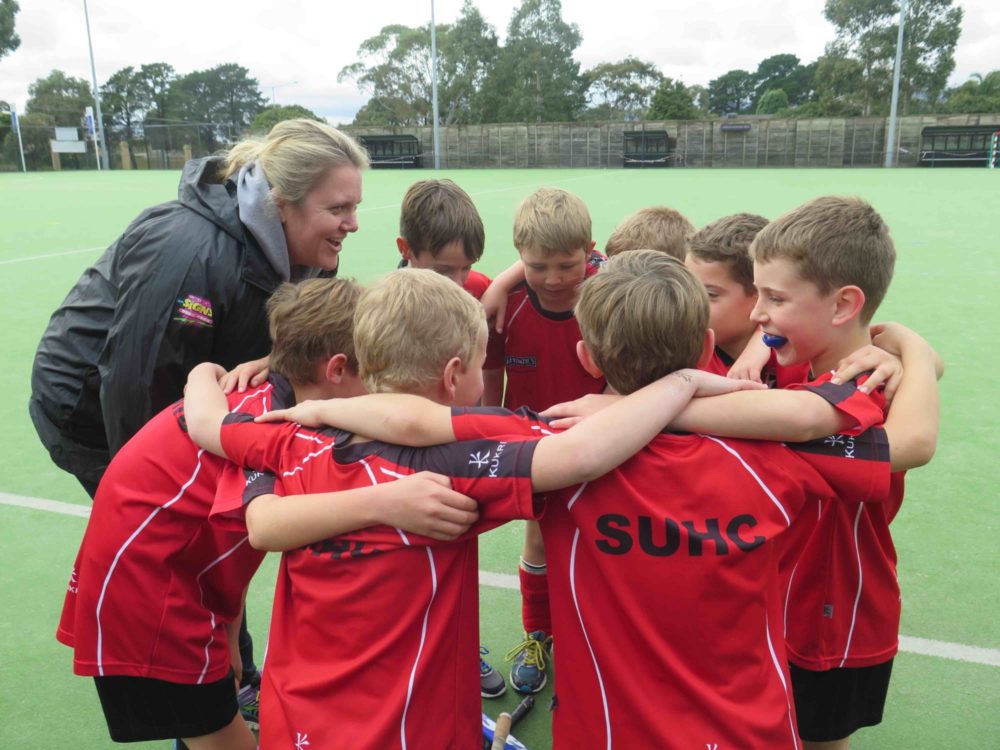 The weekend saw the juniors half way through the season and showing some great form.

Under 10 mixed – The under 10 mixed team travelled to Knox and won 4-2, against a team with a kitted up goalie. Lachie Bride scored 3 goals, and most of the team got hits on their goalie who made some awesome saves. The Under 10 girls played Mentone at Brighton, with Mentone coming out on top.

Under 12 Mixed Shield –  Very good win for the U12 shield team against one of the other finals contenders in the SE conference, overall good team performance with the ball moving around quite well and the players really starting to get some confidence over the ball as well as strong tackling.  Two goals from Lachie Paice, one from Ed Fitzgerald and some solid saves from Jacques in goals rounded out a balanced performance that highlights the successes from things that Josh is working on during training. Under 12 Mixed Pennant had a great first half leading 1-0 at half time. Then Doncaster had most of the attack in the second half but only managed to get one goal with 2 minutes to go. So, a great 1-1 draw against Doncaster’s first u12 team. Under 12 south teams struggled with a shortage of players with lots of players unavailable, and both teams went down.

Under 14 Mixed Shield SE were lucky to have the break in weather at the H-2 against TEM for their game. With lots of the attack in the first half, the core was only 2-0 at half time. With further work on passing the score finished with 5-1. U14 Shield NW had a 2-0 loss to Geelong at the SNHC. Being down 2-0 at half time they played really well to have a 0-0 second half. They had lots of attack in the second half but just couldn’t convert. While the Under 14 girls played Geelong at the hockey centre going down 6-1.  Under 14 south  with another draw, this time against St Bedes have 3 points on the board.

Under 16 Mixed Shield: Played a strong game in very wet conditions, closer to water polo than hockey at Doncaster. Despite these shocking conditions the Southern team come out ahead with a 0-5 win. Under 16 Mixed Pennant  continued their winning way with a strong 3-0 win over Mornington. Leaving both Under 16 mixed shield and pennant on top of the ladder half way through the season. Under 16 South: Disappointingly did not get to play with Frankston’s newly entered team now withdrawing from the competition. Under 16 girls shield played a strong Altona sadly going down 4-1, while the under 16 girls pennant fought hard also against Altona for a close 5-3 loss.

Under 18 with a tough 3-0 win out at Yarra. The boys and girl really can play well when the have to travel.

Our MPL teams played Footscray at home in R9.  The Reserves were up against 3rd placed Footscray which was always going to be a challenge.  They found themselves 0-2 down but came back after a toma goal from Rowdy and a goal from young Carlin Walker playing his first season in the Reserves.  Then with 2 minutes to go and 2-3 down Budha found the back of the net.  Great celebrations which were to be short lived as Footscray took the ball and headed back down the pitch to score a goal in the final 30 seconds.

MPL played next in a tough game.  The guys played hard and were 1-3 down at half time.  The 2nd half was more even with both sides scoring 1 goal.  Despite having several shots on goals and multiple PC’s they unfortunately couldn’t convert more than 1 of these and went down 2-4 to Footscray.  This young team is playing well and showing great signs for the future.

PA played Greensborough at home.  No easy games in this grade and the boys got off to a great start with a goal from Rhy Dyball followed up shortly thereafter with one from Zak Bahramis.  Greensborough came back and the score was 2-1 at halftime with the opposition looking dangerous.  After plenty of end to end play the guys finally got a PC with Liam Eddington on the field from which he was able to convert making it 3-1.  Shortly thereafter his brother Lachie ran the ball along the baseline at pace and passed the ball to Liam who chipped it in to make it 4-1.  Special mention to our defenders for a great game – especially Simmo for his magnificent stroke save and Nath Gardiner for his save on the line in a PC.    This gives the team 1st place on the ladder at the halfway mark of the season.

PD played Essendon at home and had a great game.  Plenty of young talent in this team supported by some of our more experienced coaches who played and also Ed Arnold our GK from the PL team playing on the field.  The guys shared the goals around with Lachlan Edwards, Sam Tickner, Jarnail Singh and Jesse Workman all getting one each.  This win puts PD into the 4 for the first time this season with them being 3 points clear of MCC in 4th place.

PE were unlucky this weekend.  Things were looking good with the guys ahead of the KBH Brumbies early in the 2nd half but with 15 minutes to go the opposition equalized.  The score remained unchanged until the last 3 minutes when we had a repeat of the Reserves game the day before with 2 goals being scored in the final minutes.  Unfortunately both goals were for KBH so we went down 2-4.  Goals to Jono S and Nick Davey.  This team is unlucky not to be higher up on the ladder with some very close games.  Great signs for the future.

PF took on MCC at home and came away with 3 points to leave them 1 point clear on top of the ladder at the half way mark.  Goals to Paul Hendricks and Harry Singh (2).

MMA headed out to Waverley on Sunday morning and came away with 3 points after beating Waves 2-1.  Both goals were by Mark Lambert.  MMA are currently sitting in 5th place just 2 points outside the 4.

MMB played down at Mornington on Saturday night at 5.00pm and they went down to the home team 0-3.

Results so far for the weekend.