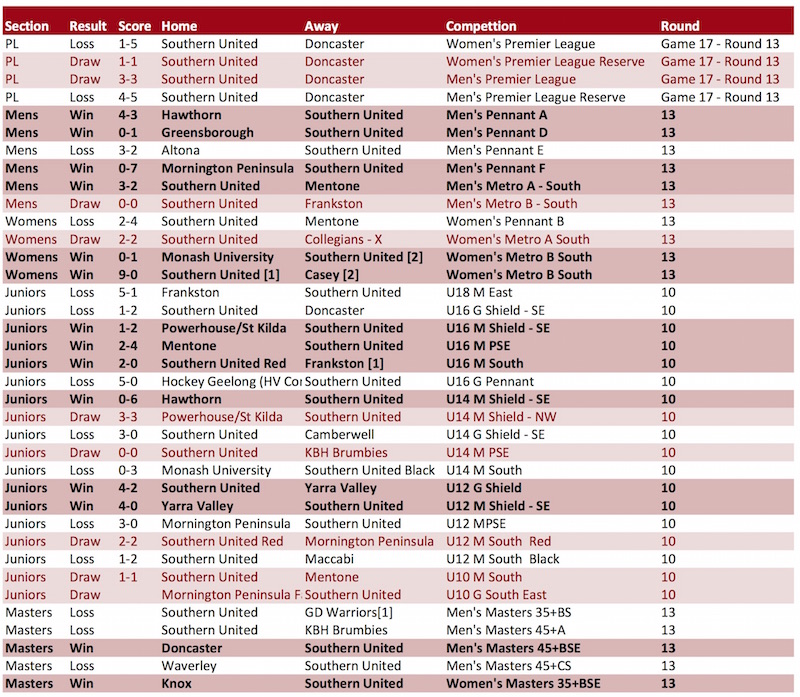 Big match day at Farm Rd as well as the $2,000 draw. The two winners – The Cox Family and Sandars/Thomas Family shared the spoils.

Great result  for the Under 14 mixed shield North West team who drew 3-3 with Powerhouse. After a good start by Southern, Powerhouse had managed to draw away to 3-1 lead, the team who have continued to show their resilience the whole season fought back. Amazing work. Huge thanks to Brendan who doubled up from Under 14 pennant, as well as Lachie from Under 12 shield. Goals to Spencer – returning from injury, Charlie and Lachie.   The under 14 mixed shield south east played Hawthorn for a 6-0 w 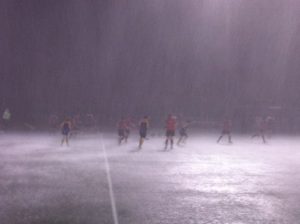 in. Great game by Nick playing up from shield NW, goals shared around the team.

This week U14 Mixed Pennant team played at home against KBH Brumbies. This was a round 1 rematch game where Southern won, with our team confident of a good result for this game. After many attacks at goal from both teams, neither was able to convert on the scoreboard and the final score was a 0-0 draw. Southern had a final chance with a corner with 2 minutes to go but was unable to convert. It was a game played in good spirits by both sides. Well done Southern!

The Under 16 south team followed and managed to play more than a half before they were drowned out, but with half game complete a 2-0 win for them. The under 14 girls went down to the Camberwell girls, while the under 16 shield girls had a close game going down 2-1 to Doncaster.

The under 16 mixed shield had a tough game at Albert Park coming out with a 2-1 win over Powerhouse, with goals to Carlin and Liv, while the under 16 mixed pennant continued their success with a 4-2 win over Mentone.

Under 18s  may have lost the first half but… they definitely took out the swivel comp going on! After one of the Frankston guys managed to do a nice swivel and beat a couple of our players… Riley Sawyer decided to step it up a notch and do a triple reverse one handed swivel that left the Frankston players dumbfounded and full of respect! Not what we really promote as coaches but, it’s nice to see the teams playing some good hockey and enjoying it too! And they did play some very good hockey… We drew the second half with the team playing some text book perf hoc! 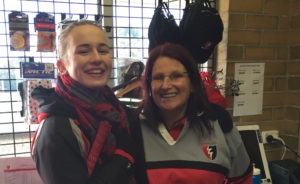 Also a great result for the under 12 south red team who have their first points on the board with a draw against Mornington who have had four wins already. Great team play and great to the skills growing with this team each week. Well done coaches Dan and Laura. The under 12 mixed shield team game  against Yarra at SNHC was another strong win, helping them look stronger on top of the ladder. A huge game for the under 12 girls shield also against Yarra, but this time at Farm Rd. The Southern girls have had a tough season but playing against fourth placed Yarra turned the table with a 4-1 win. The under 12 south black team had the fun of playing Sunday, instead of Saturday due to a game against Maccabi. With a team depleted due to the Sunday game, they did a great job to only go down 2-1.

The under 10 mixed team played Mentone. The Southern boys have only lost one game this season, to Mentone, so it was going to be close, and it was finishing in a draw, with some great play by both teams. Under 10 girls also finished in a draw with Mornington.

With four rounds together the ladders look promising with three teams on top: Under 16 Mixed shield and pennant, Under 12 mixed shield; while  Under 14 mixed shield, under 16 south, and under 12 mixed pennant are in the four.

Premier League Reserves opened the Legends day in style with Buddha, Tessa and Hammo warming up in their Moorabbin shirts from the SL2 win of 2006, while Craig had his on in spirit. Hammo played the match with his Moorabbin shirt as his goalie smock, a great look.  The game against Donny proved to be a close game but ended up down 5-4. 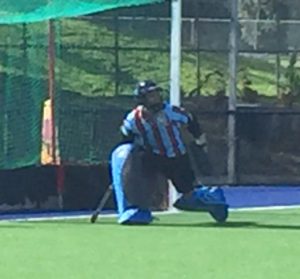 Hammo honouring the Moorabbin colours and the SL2 win of 2006.

Premier League playing Donnie, who is clearly in the top four was going to be tough, but the firsts showed what they are made of, with team closer to full complement with the 18s back from Launceston and started the game with a goal early and were up 3-1 at half time.  They could not quite hold that lead, and finished with a good result given the strength of Donnie a 3-3 draw.

MPA took on Hawthorn in a 2 v 3 play off with the winner to take a 3 point lead in 2nd spot.  Neither team were going to make it easy for the others. Hawthorn  took the lead early but a quick goal in reply from a pass into the D by Liam Eddington resulted in a goal by his brother Lachie making it 1-1.  Hawthorn responded quickly and it was 2-1 to Hawthorn for most of the game.  After some half time huddles a different SU team came onto the pitch.  20 minutes into the 2nd half the goals started coming with one each to Rhy Dyball, Ben Eddy and Nath D’Souza.  Our PA guys came home with the points in a 4-3 thriller.

MPD headed out to Greensborough for a pleasant 5.00pm game on Saturday evening.  Whilst Greensborough are sitting near the bottom of the ladder they were not going to go down easily.  Southern had most of the play but could only convert 1 goal, but that was enough to secure a win.  PD now sit in 3rd place on the ladder.

The team of brothers – Pennant E – with Mark And Lachie Edwards, Nick and Ben Davey – with Adam helping coaching and Mel d’Cruz with Con coaching –  continued to be the unluckiest team around. The game against Altona yet again was a very close game going down 3-2 in the end. Goals to Lachie and Mark Edwards. The impressive game by MPL goalie Ed Arnold – on the field, also deserves a mention.

MPF we up against Mornington but this slick outfit was going to be hard to beat taking the points 7-0.  Hat trick to Harry Singh, 2 to Julian and one each to the spirited Fisher Bros.  PF are now sitting in 2nd position on the ladder.

MMA had a close game against Mentone but were just too strong and won the game 3-2.  Goals to Sam Waters, Jason Bloms & Aiden McLoughney.

MMB played Frankston and had a draw with neither team able to get the ball in the back of the net.

Premier League – played home to Doncaster but Donny were very strong on the day getting up 5/1 over our girls.

Reserves  went 1 nil down after 20 seconds but from there on had most of the opportunities, unluckily managed to convert only 1 of them for a 1/1 draw but looked the stronger team for more of the game.

Pennant B got to a 2 nil lead against Mentone at the SNHC but then lost their way to go down 4/2. Sitting in 3rd spot on the ladder.

Metro A  had so many chances, got a 2 nil lead but missed alot of chances & let a determined Collegians back in to the game to be 2/2 late in the 2nd half. Had more chances but never added to the score & drop back to one point behind the ladder leader OHA.

Metro B (red) -had a comprehensive 9/nil home win against Casey 2, but define the spirit in which hockey should be played, both sides showed good humour & respect for each other the whole game. Comfortably in the top 4.

Metro B (white)  had a hard fought win against Monash getting up 1/0 & the newest Southern team are sitting top of the ladder on equalisation points.