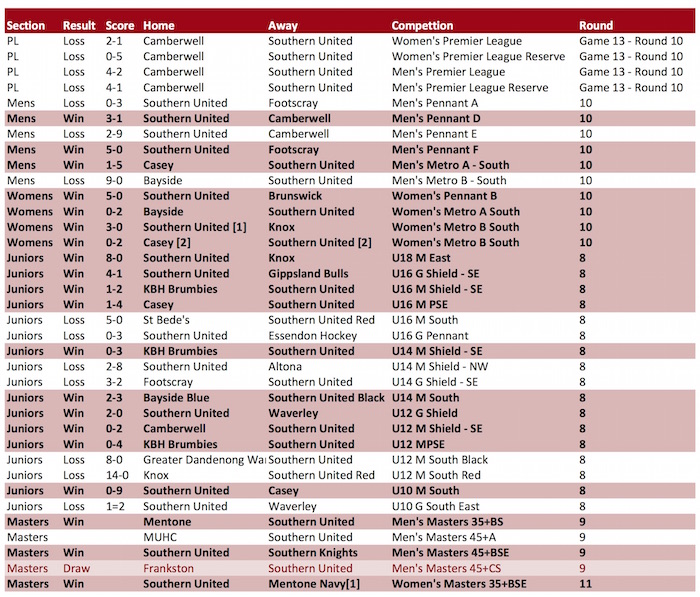 It was a VERY cold night for hockey on Friday night, and parents and players all wrapped up for the occasion. The junior teams performed brilliantly on Friday night.  The under 14 south team had their first win for the season after 3 draws. In a game against 3rd on the ladder Bayside they came away with the 3 points in a 3-2 win. Awesome work guys and girls. 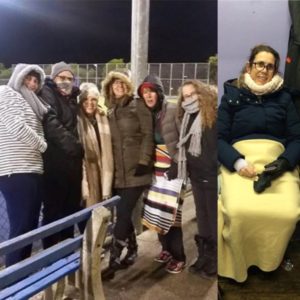 Rugging up for the cold. 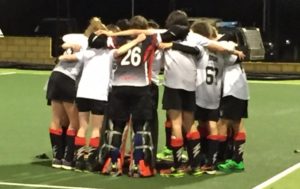 At Elgar park the under 14 mixed shield SE played KBH Brumbies with KBH performing a lot stronger than the first round of the season, the first half was not showing a lot of headway for either team. Second half saw the Southern players move the ball better for a 3-0 win.  The under 16 mixed shield SE team then faced the Brumbies. Their game in round 1 against Brumbies was the only loss the Southern 16s had in the first 7 rounds.  While Brumbies had most of the play, the second half also saw the Southern players coming out stronger. For most of the second half the score remained at 1-1, then a brilliant goal by Carlin in the last 3 minutes gave Southern the 3 points. With both Under 14 and under 16 mixed shield now both on top of the ladder. The under 16 mixed  pennant  continued their great season with a 1-4 win against Casey keeping their top spot on the ladder. The under 16 girls shield played gippsland at Farm Rd for a strong 4-1 win.
The Under 18 team played Knox at home, and actually at MBN. The team responded excitedly to playing at home with an 8-0 win with a hat trick to Sam Tickner, and 2 to Mitchell Swain.

Spot the Southern player – hint – they have the red socks.

The Under 12 mixed shield played top of the ladder Camberwell for a strong team win, giving the Under 12s the top spot. The U12 Mixed Pennant team had a white on white clash with KBH Brumbies this morning at SNHC. As we turned up in our white away clash tops, apparently the Brumbies have been playing in white all year because their new red shirts haven’t arrived yet. The first half was a struggle to work out who was who. With some of our kids in red, some with blue bibs on and other just in white it didn’t seem to bother the kids and they managed to work it out ok and with some great passing meant we were up 3-0 at half time. At half time we managed to get out kids in more red and the Brumbies put on fluoro vests and blue bibs, which worked much better. We had all the attack in the second half with Lucien who normally plays full back having a run on the forward line. He had many shots on goal but the Brumbies goalie did a great job at making lots of saves. Poor Lucien didn’t manage to come away with $20 his dad was offering if he got a goal, much to our supporters disappointment. We came away with a 4-0 win which was a great finish to the first half of the season. It was also Matt’s last game at coaching this team for the season and we wish him all the best for his move back to Gippsland.  The U12 Girls A changed their game plan and produced a great display and won for the first time officially 2-0 v Waverley. Thanks to Charlotte from the under10 girls helping out to make a full team. Some great goal keeping from Isa. All the extra training is really showing reward. The girls worked hard across the whole team and did their roles and supported each other really well.

Fabulous win to the U10 Mixed crew today, 9-0 against Casey. We saw great depth coming through for the club as four players stepped into the team from the Intraclub competition today, with Lillian Bohl scoring a hat-trick. 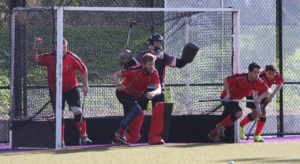 The Premier League teams headed to out to Matlock Reserve to play Camberwell who are sitting on the top of the PL ladder.  SUHC came out strong and were leading 2-1 at half time.  Camberwell evened the score and it stayed that way until 10 minutes before the end of the game when Camberwell scored 2 quick goals.  SUHC goals to Nico Dumont and Matt L’Huillier.   Our Reserves did well against the 2nd on the ladder team but lost 1-4 with a goal to first time Reserves player Ben Rogalsky.

Pennant A took on Footscray at home but the Doggies were too tough with PA conceding 2 goals earlier on in the first half.  They tried hard but couldn’t make a comeback against the hard playing opposition.  They went down 0-3.

Pennant D played top of the table Camberwell and a fully armed Southern team took it up to them.  Camberwell scored early in the 2nd half but our strong defence kept it to one.  The boys ended up taking the points with a thrilling 3-1 victory.  2 goals to Rob Graham and 1 to Ben Rogalsky.

Pennant E played Camberwell at Brighton, although “close” to home, the late withdrawals made the game tough. Although the result was a 2-9 loss, the team played a lot stronger than the result showed.

Pennant F played Footscray at home and came out with a resounding 5-0 victory.  Goals to Julian Pratt who hit the ball so hard his stick snapped in half!  Harry Singh and 3 to Dave Fisher.

Metro A headed to Casey and took it up to them winning 6-0.  1 goal each to Mark Lambert & Tim Williams and 2 each to Jason Bloms & Jarrad Camille.

Premier League – travelled to Camberwell on a cold Melbourne day and put in a strong performance to go down 2/1. Need to make the most of their opportunities in the circle to put pressure on their opponent.

Reserves – took on Camberwell who hold top position on the ladder & went into half time only 1 nil down. Unfortunately lost their way for 20 minutes in the 2nd half, and although finished strongly went down 5/0.

Pennant B – had a home game against Brunswick & in a game where they were expected to win came away with a strong 5/0 victory. Now sitting 3rd on the ladder & at their best looking strong.

Metro A – had a strong start to the game without getting a score. Kept pressuring a physical opponent in Bayside to come away with a 2 nil win & now share equal top spot on the ladder.

Metro B (red) – continue to push strongly and had a solid 3/0 win against Knox. The points equalisation is a bit hard to fathom but the girls are in the top 4.

Metro B (white) – Took on Casey’s 2nd team on their home ground & came away with a 2/0 win. On equalisation currently sit in top spot.