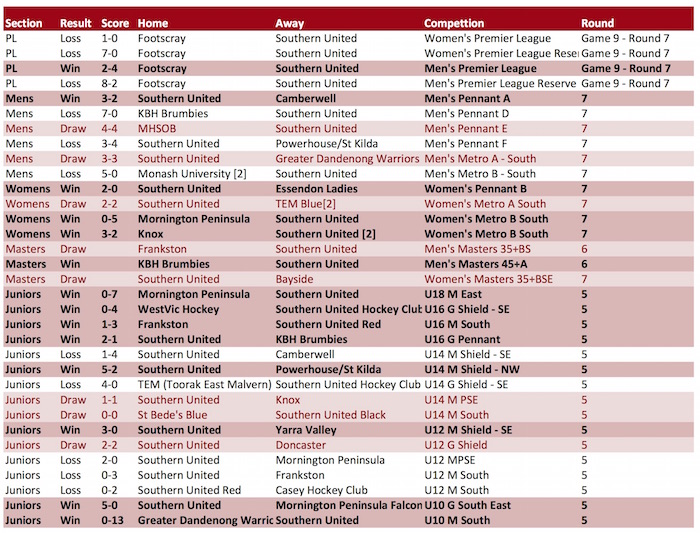 A great round for three of our teams that have had a tough start to the season, and have now posted a win. For the under 14 mixed shield NW and Under 16 girls pennant, the win was that much sweeter in front of the home crowd. The under 14 mixed shield NW came out firing against Powerhouse/St kilda with some great passing and team work. With a hat trick to Max Eddington they came away with 3 points and a 5-2 win.  The under 16 girls pennant played KBH Brumbies also made of relatively new players and the girls showed tenacity to win 2-1. The under 16 south after a close game against Waverley last week  came away with the 3 points at Frankston in the 9.30pm game with a 3-1 win. All Friday night teams now have some points on the board.

The under 14 south team, once again came away with a draw, this time against St Bede’s at Mentone and the under 14 mixed shield SE went down to the fast Camberwell team 4-1. The under 16 girls made the trek to Footscray to play WestVic – at least it wasn’t all the way to Ballarat, and had a strong 0-4 win. The under 14 pennant boys played Knox for a 1 all draw.

In a round of deja vu three Southern teams played teams they have played in the last 3 games. Under 14 girls played TEM, under 12 mixed shield played Yarra, and under 12 south black played Frankston, with plenty of  deja vu to come in the season when the shield team plays Yarra the four times for the season.  The results were not as good as last time with under 14 girls this time going down 4-0 and the under 12 mixed shield having a 3-0 win.  The under 12 south black this time went down to Frankston 3-0.

In other Saturday morning matches, the unbeaten under 12 pennant team had their first loss against also unbeaten Mornington, while both under 10 half field teams had a win.

The MPL teams headed to Footscray in search of some points.  The PL team played one of their best games this year to defeat Footscray 4-2.  2 goals to Matt L’Huillier and a goal each to Mack Thompson and Matt Steinfort scoring their first goals for the season.  The Reserves game didn’t go to plan and they were defeated 2-8.

The undefeated MPA team took on Camberwell at home and found themselves on the wrong side of a 2-0 scoreline 10 minutes into the 2nd half.  2 quick goals – 1 off a pass from Lachie to his brother Liam Eddington on the goal post and a drag flick by Liam from a PC brought it back to even.  A goal 10 minutes later from a overhead from Matt Goetz to Miniz Silvers who skillfully passed it to Lachie Eddington to tomma it into the top right hand corner gave SU the advantage.  Great defensive work from the boys saved 2 PC’s in the last minutes of the game to give a 3-2 win to SUHC.

Our MPD guys with some late withdrawals from the team took on a highly skilled KBH Brumbies team and unfortunately went down 0-7.

MPE went to MHS and found themselves 0-2 down within the first few minutes.  Once the team got past the initial shock they sprung into action and managed to bring the scoreline back to a 4-4 draw.  Goals to Ben Davey and Mike Brooks, 2 to Alasdair Stretch.

MPF took on PHSK at home and they too found they were on the wrong side of a 1-4 scoreline.  The boys worked hard and came back well just falling short of a draw losing 3-4.  Goals to Travis Fonceca, Harry Singh and Lachlan Arnold.

MMB went to Monash and went down 1-5.  Goal to Marcus Barber.