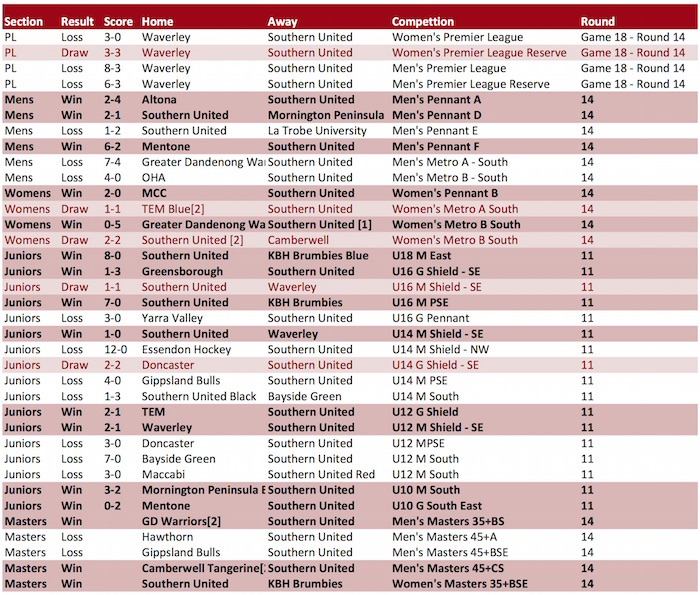 In a round of mixed shield games against Waverley it was going to be tough for the shield teams but overall Southern came out on top. The under 14 mixed shield SE competition is tight with the top 4 separated by 3 points, and goal difference just as close. Southern played Waverley on Friday night at Brighton, in round 3 it was a VERY tight draw.  The game was once again very tight, eight penalty corners were defended successfully, while we had more open shots on goal. With the one goal scored for the game by 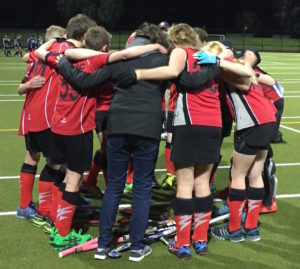 Andre, much jubilation for the Southern players, and parents with the 1-0 win.  The under 16 mixed shield played the SNHC shield round. The team were 1-0 up at half time, but Waverley managed to sneak a goal back to end in a 1-1 draw. The under 12 mixed shield  game also at the SNHC was a tight game, with Southern scoring in the last minute to take a 2-1 win. These results keep U16 and Under 12 mixed shield on top of the ladder, and under 14 second.

The Under 16 girls shield played Greensborough for a 3-1 win. Under 16 mixed pennant continued their incredible season with a 7-0 win over Brumbies, keeping them on top of the ladder, and facing 2nd in two weeks time.

The under 14 shield girls trekked to Doncaster and were down 2-0 at half time, but with fierce determination and great keeping by Dom fought back for a draw.   The under 14 NW shield had the joy of facing top of the ladder Essendon for the 3rd time in the season and went down fighting. The results of their hard work and improvement was evident in multiple D penetrations and some attacking short corners. Great work guys. The under 14 south  team played, with lots of attack in the last half and many penalty corners they did not quite get the extra goal and went down 2-1 with the one scored by Jaiden Pant.

The under 12 shield girls got up really early to venture out to SNHC this morning. 2-0 up at half time against 2nd place TEM was well deserved. They  held on to win 2-1 with some great defending and an amazing team work from all.  The Under 12 mixed pennant played the Donnie team which had downgraded from shield earlier in the year for a 3-0 loss. This weekend it was Under 12 south red’s turn to play the Sunday game, it was great to see our tennis play Tori get a chance to play when filling in for those that could not play the game on a Sunday. The under 12 south black played Bayside going down against them.

The Under 10 mixed crew had a 3-2 win against Mornington Peninsula Blue, coming out strong with Xavier scoring two goals and a goal for Hamish.  The second half saw some great play for Mornington, which worked the defence hard.  The under 10 girls played Mentone for another win.

WPL – were away to Waverley & in a game that was fairly even across the ground with the best opportunities for Southern via PC’s, unfortunately we couldn’t find a way to convert them & went down 2/nil.

WPLR– in an up & down game which could have resulted in a win for either team. The girls were down 3/2 with a minute to go but snatched a draw with a late field goal from the top of the circle.

WPB – played against the top side MCC at their home ground, who have only lost 1 game but have a goal difference of 40 to 7. The girls played a great game in a 2 nil loss but hold 3rd spot on the ladder on goal difference.

WMA – keep finding ways of getting draws from winnable games, the 1/1 final result was disappointing as the girls had 65% of the possession but again struggled to put a team away with missed chances in front of goal.

WMB (red) – were up 2/nil at half time against Dandenong who then gave Southern a walk over at half time. Currently hold 3rd spot on the ladder.

WMB (white) – great result with a 2/2 draw against Camberwell who have yet to lose a game, at their home ground & now take top spot on the ladder.

Our PL teams headed out to Waverley.  The Reserves started off well and within a short time were 1-1.  Waverley put us under pressure and it resulted in a few missed opportunities for SUHC and Waverley surged to a 1-4 lead at half time.  The guys came back strongly after the break and the scoreline got to 3-4 but Waverley surged away in the last 15 minutes of the half and the guys went down 3-7.  Goals to Matt Steinfort, Lachie Eddington & Craig Hardham.  The PL guys followed and the game was just as tough.  Waverley put on the pressure and we were 0-3 down at half time.  Again our guys kept fighting but weren’t strong enough on the day to match Waverley and went down 3-8.  Goals to Josh Ephraums, Nathan Ephraums & Nico Dumont.

MPA were at the SNHC and with some draws the day before meant a win would put the team back in top position on the ladder.  The guys came out firing and the Eddington brothers yet again combined to put the score at 1-0.  Altona came back firing and quickly the score was 1-1.  Some strong play by the whole Southern team saw the scoreline get to 4-1 before Altona got a breakaway goal and made the final score 4-2.  Special mention to Simmo and our defenders who did a great job on the Penalty Corners.  Goals to Nath Gardiner, Chris Silvers and 2 to Lachie Eddington.

MPD were looking at a tough game against Mornington who needed a win to get into the 4.  Southern needed a win to help secure a top 4 position.  In the end we were too strong and came out 2-1 winners giving us the 3 points and third spot on the ladder.  Goals to Lachie Edwards and Rob Graham.

MPE played Latrobe at home and in yet another close game lost 1-2.  Thanks to John Leighton for stepping in at the last minute to GK.

MPF headed out to the sandpit at Mentone.  With only 3 points separating 1st and 4th on the ladder every game is important if you want to get the double chance. Southern came out firing and with Tim Williams in good form scoring a hat trick.  Guys ended up with a 6-2 win.  Other goals to Harry Singh and 2 to Julian Pratt.  Team is currently sitting in 2nd spot on the ladder.

MMA were up against Dandenong at their home ground.  Always a tough game and playing with only 10 players it was going to be harder than usual.  The guys did well under the circumstances going down 4-7.  2 goals to Tim Williams and one to Sam Waters.

MMB played OHA who were just too good on the day going down 0-4.