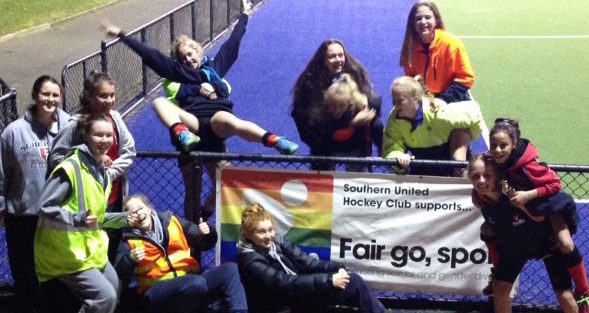 Fair Go Sport round was celebrated by all.

SUHC played host to PHSK and put on a fantastic display of hockey.  The Reserves kicked if off with a thrilling 4-4 draw with goals to Shane Campbell, Craig Hardham and 2 to Ben Hughes.  Not to be outdone our PL team came out and showed their opposition that they would fight to the end.  With the score 2-3 down Southern managed to get a PC on the final whistle and Matt L’Huillier put his 3rd goal in the back of the net making it a 3-3 draw.  The boys are playing some great hockey with draws with 2 of the top 4 teams and a close game against Hawthorn in recent weeks.

MPA played took on bottom of the ladder MCC who are fighting off relegation.  The guys were up 2-0 at half time but MCC came back and scored a few somewhat controversial goals to make the score 15 minutes into the 2nd half 2-3.   Ever the fighters they came back to level the score and with 5 minutes to go take the lead 4-3.  A somewhat unfortunate PC was awarded to MCC with 10 seconds to go but MCC shanked it under the pressure and the guys came away winners.  Goals to Rhy Dyball, Zak Bahramis, Nath D’Souza & Lachie Eddington.  MPA now on top points with Footscray who are both 8 points clear of 2nd & 3rd spot on 25 points.

MPD headed to MCC on Saturday evening for a 5.15 pm game.  Currently in 3rd spot the guys wanted to win this to stay in touch with the opportunity for the double chance in finals.  Southern were too strong and came away 4-0 winners. Goals to Jarnail Singh, Con D’Cruz and 2 to Shane Campbell.

MPE took a trip out to Yarra Valley and the unlucky curse hit them again.  Such a close game and some great play until we ended up with a stroke awarded against us with 5 minutes to go.  Boys went down 0-1.  Players are hoping that the promised new pitch comes soon with it being challenging to play on such an uneven surface.

MPF took on Croydon on Sunday evening at Farm Road and what a game it was.  Fast paced and with both teams keen for a win – Southern to get the double chance at finals and Croydon to consolidate a top 4 spot.  This game had it all, including the HV CEO playing in the other team.  Fantastic performances from some of the younger players – Nick Durrant, Lachlan Arnold, Steve’s x 2 & Hugh Stimson all showing some class.  They take on 3rd placed PHSK in what should be another great game.  Goals to Julian Pratt & Dave Fisher.

MMB played Mentone and went down 1-3.

The end of season is nigh, with only two rounds after this weekend, so top four are solidifying for most competitions.

Under 16 Mixed Shield and Pennant had the night off with a bye, but hoping to hold their top positions while relaxing.  the Under 16 girls  played at home against Brumbies but could not get the points going down 2-0. Great work by Emily standing in as GK for the 16s in her first game as hockey Goal keeper. Under 16 Girls Pennant continue their tough season going down to Camberwell.

Under 18 played Mentone for a win. Will they be able to make the four?

Under 14 Mixed Shield SE 2nd week in a row played one of the top 4, this time Camberwell. An incredibly tight match with four players out for Southern ending in a 2-all draw. Thanks Ewan for helping the SE team. Southern keeping the 2nd position on the ladder. Under 14 Mixed NW  played Geelong, with two of the players moved to SE game due to shortages, they played a close game going down 4-3 with two goals to Charlie. Under 14 Mixed Pennant  played the really strong Frankston team with a 4-0 result to Frankston. Under 14 South second on the ladder St Bede’s only going down 1-0. Great going. Under 14 Girls played the strong TEM team with TEM winning 3-0.

Under 12 Mixed Shield SE who have been playing a great season played Camberwell. Like the 14s they were missing three players, with the help of players from the pennant team, and a save of the season by Jacques, they beat Camberwell 1-0. The under 12 mixed pennant played KBH Brumbies for a great 4-0 win, with a hat trick to Julius, keeping their third position on the ladder. The under 12 mixed south red  team had their first win for the season with a 2-1 win over Bayside. Great to see our goalies having a run on the field with Jacques and Ashton both scoring goals. The Under 12 mixed south black  team travelled the long trek to Casey and went down 4-0. The under 12 girls played Doncaster with Doncaster scoring the 1 goal for the match.

Fabulous 9-1 victory over Knox for the u10 Mixed crew. The team showed they have improved after the last two tough matches, with dedicated tackling, strong attack and use of the whole field. Xavier scored 6 goals and Hamish 3. The under 10 girls played the stronger and bigger Waverley girls, despite their hard work, Waverley took the three points.

WPLR – had more possession & looked the stronger team for most of the game. Well deserved 3/2 win & the girls are in 8th spot on the ladder.

WPB – a good opportunity slipped by at Dendy st. with our girls going down 1/nil to Camberwell. Had chances but couldn’t get a score on the board, need to lift for the last couple of weeks as they are in equal 4th & can be dangerous in finals.

WMA – in a game that could have taken the team to equal 1st the girls had a really scratchy game against OHA and went down 1 nil, now less than a game clear of third placed St.Bedes.

WMB (red) – great momentum heading into the finals with the girls having a comfortable 8 nil win over Casey & sit top of the ladder.

WMB (white) – had a rough run at Mornington going down 1 nil, but still in finals contention sitting in 4th place. 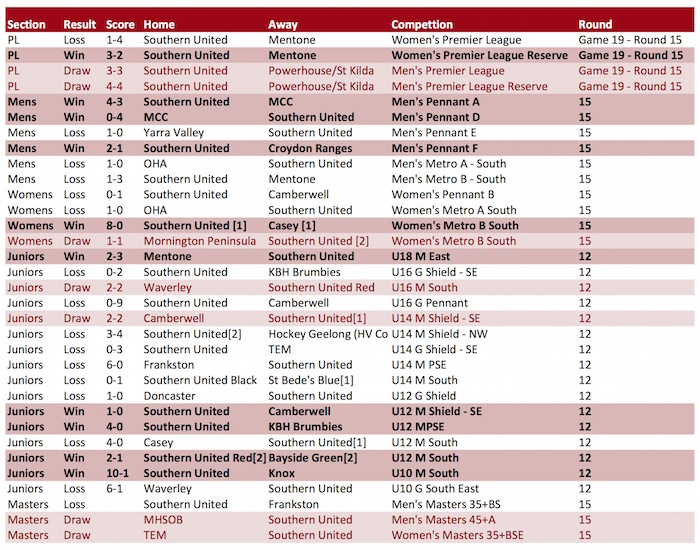