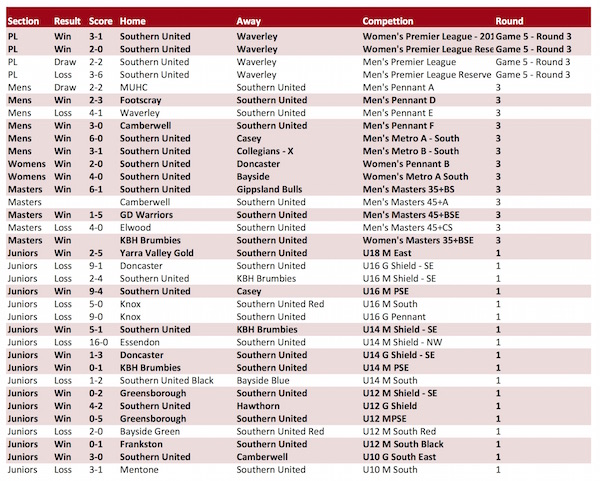 WPLR – After so many close results the girls had a strong win against Waverley in front of a great SUHC crowd,  coming away with a 2/0 win.

WPL – Following on from the strong win by the WPLR the WPL team had a win of their own against Waverley finishing 3/1. Great result for the squad with both teams winning their first game in Premier League having been competitive in every game so far this season.

Metro A – After a slow start to the year the girls came up against Bayside who they lost to in a pre-season practice game. In a competitive match the girls came away with a 4/0 win.

Metro B- the Met B team have started exceptionally well this year with wins in the 1st two games, but they had a bye this week.

MPL played one of the best games so far this season and drew 2-2 with Waverley and our MPL Reserves losing 3-6.
Men’s Pennant A played MUHC away on Saturday in what can only be described as an agonizing draw 2-2 although the boys did do well to come back from 0-2 down.  They are looking forward to the rematch at MBN later on in the season.
Men’s Pennant D defeated Footscray in a thriller at the SNHC winning 3-2.  2 goals to Jesse Workman and 1 to Lachie Edwards.

Men’s Pennant E found Waverley too tough and went down 1-4 – with the only goal scored going to Matt Salvage.

Men’s Pennant F went out to Camberwell and were pleased to come away with a 3-0 victory.

Men’s Metro A took Casey on at home on Saturday and with Julian Pratt hitting 3 goals, Mark Lambert 2 and Peter Paice 1 giving them a 6-0 victory.  Roger Arnold in goals keeping a clean net.

Men’s Metro B played a friendly but competitive game against our friends at Collegians early on Sunday morning and came away with a 3-1 win.

The weekend saw the first round of Junior hockey.

At Farm Rd the Under 14 South started the night with a game against Bayside, with two players out early with injury (we hope the 6 stitches heal quickly Tom) the team played well but went down 2-1 to Bayside. The under 14 shield SE took the field next with Jacques Carstens from under 12 filling in as goalie. An exciting game with some bits of controversy finished with the Under 14 Shield SE team winning 5-1 over KBH Brumbies, with Christian van der Merwe enjoying his role up front instead of defending, with 3 goals. The Under 16 SE team also faced KBH Brumbies, with a different result with KBH taking the points with a 4-2 win.

While over at Elgar Park the Under 14 Pennant team – our third under 14 team with the two shield teams this year – had a great 1-0 win over the KBH Brumbies.

The under 14 girls who have had a tough pre-season showed their true colours in a game against Doncaster with a 3-1 win. Quite a change for the girls who fought hard for their win after many who have been in the under 12 premiership team last year, and runners up the year before. Great work Dom, and it is good to get a work out. The under 16 shield girls also faced Doncaster with a very tough game to lose 9-1/

The second under 14 shield team faced the toughest competition in the NW competition structure in Essendon, and fought hard in a huge step up for all of the children, losing to Essendon. Rory in goals faced the brunt of Essendon attack, but stood up well to it.

The under 16 mixed pennant team were the lone team at Brighton on Friday night, with the master coach Chris taking the team to a big 9-4 win against Casey.

Over at Yarra the under 18 team with Buddha in charge, I am sure under the watchful eye of Shan, showed once again the Under 18 competition is a great thing with a 5-2 win. It is great to see these players continuing their hockey during the VCE years.

Saturday morning saw a busy morning around Melbourne for the under 12s and 10s.

At Farm Rd, Warren’s under 12 team met Bayside. The team with many new players played  a good team game and went down 2-0. The under 12 girls shield followed, with newly a new team from last year the start was not as strong as they would have liked, but they finished with strength to take a 4-2 win against Hawthorn. The under 10 girls with Lisa Carruthers followed, with many of the tiny girls from last year now fitting the half field better, they had a 3-0 win against Camberwell.

The 11.30 time slot at Farm Rd now has the 1/4 field Northern Sharks Hockey League – Southern, Bayside and Mentone.  A huge turn out of kids, having fun playing hockey.

The under 12 pennant played their first game at the State Netball and Hockey Centre, the first time there for most of the players to play a huge game with a 5-0 win over Greensborough, while the mixed shield team also played Greensborough at Greensborough beating them 2-0.  At Frankston the other under 12 south team played Frankston for a 1-0 win.

The under 10 mixed team faced the parking dramas at Monash to push themselves hard but not strong enough for Mentone.