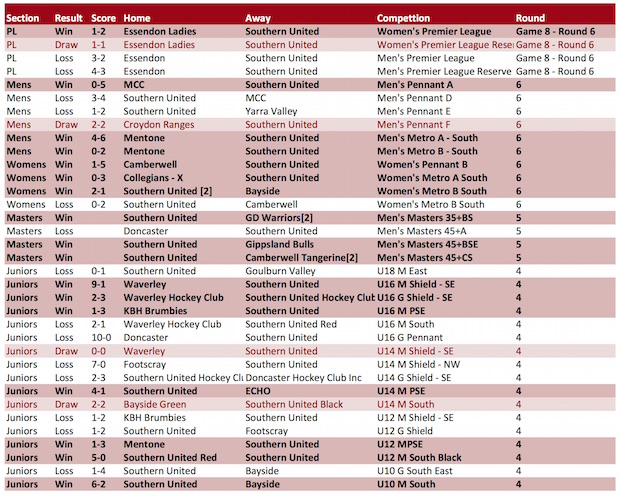 The flavour of Friday night was games against Waverley. The under 16 mixed shield team played undefeated Waverley at the hockey centre and in a very strong show came away with a 9-1 win. While at Waverley the undefeated under 14 mixed shield team, who had been beaten by Waverley in the practice match, played a nail biting game for a nil all draw, thanks to great defence from Erin and Emily, and some hard and fast mid field work from Billy, leaving all supporters very horse. Next up at Waverley were the under 16 South team who achieved the first goal for the season, and played a really tough game putting their body on the line in defence with a very close 2-1 defeat, with all 3 goals scored within 3 minutes in the first half. The under 16 girls shield, with a very late 9.30 game had success with a 3-4 win with Emily Hamilton Smith and Olivia Downes doubling up from their earlier games.

At Footscray the under 14 mixed shield NW team put up a strong performance against Footscray with better plays than last week, to be beaten 7-0.

The under 16 mixed Pennant team continued their unbeaten season with a 3-1 win over Brumbies, while the under 16 pennant after briefly having a home game scheduled, then travelled out to Doncaster for an 8:20 game. They managed to gallantly survive the cold weather, the girls lost the match 10/0, but kept trying for the whole game.

At Brighton the under 14 south team got their first points on the board with a Brighton shoot out against Bayside for a 2-2 draw. Awesome work guys. The under 14 girls then hit the pitch at Brighton against Doncaster, despite some great work, Doncaster got the best of them in the last minutes to get the points 2-3.

Chris’s under 14 pennant team yet again are showing amazing strength for the “thirds” in under 14 to get a second win against ECHO 4-1.

Premier League Women took on Essendon who are sitting 6th on the ladder and came away with a hard fought 2/1 win. Great result away from home in front of a good crowd.

Premier League Reserves played a large part of the game in the defensive half of the ground going down 1 nil in the first 15 minutes. In the latter stages of the 2nd half they had to defend against 10+ Essendon P.C’s in a row. In the last minute of the game Southern earned a P.C & scored to level at 1/1.

Pennant B played away to Camberwell and came away with a very strong 5/1 win. The girls are playing a good brand of hockey most weeks & are currently sitting 3rd on the ladder.

Metro A – The ladies had drawn the last 2 winnable games so looked determined to get a win & were up 3/0 at half time. They played their best game of the year with some quick ball movement and held the 3/0 lead to win by that score against Collegians.

Metro B Red played its hardest game of the year against a more experienced and cohesive team from Camberwell. All players worked very hard, giving the team goal chances, but lost possession on numerous occasions due to rushed passes to marked players. Result 2/0 loss.

Metro B White – the ladies continue to shine with their 3rd win in as many matches getting up 2/1 vs Bayside.

The Premier League teams travelled over to Essendon in what proved to be 2 very tight matches.  The PL guys came back from 2-0 down but couldn’t get over the line with Essendon winning 2-3.  Goals scorers were Jesse Workman & Nathan Ephraums.

The Reserves played next and this was also a very tight game with the score at 3-3 for most of the 2nd half.  Essendon pinched the points with a goal in the last 30 seconds. Goals to Lachie Eddington, Michael Pearce and newcomer to the team Carlin Walker.

PA took on MCC out at MHS.  Whilst MCC proved to be fierce competition they just couldn’t get past the SU defence with the boys winning 5-0.  Goals to Chris Silvers, Lachie Eddington, Nathan Gardiner, Zak Bahramis & Liam Eddington.

PD also faced MCC at home but the luck was with the visitors just beating our boys 3-4.  Goals to Packo, Jesse Mulder & Jarnail Singh.

PE took on Yarra Valley at home too but went down in another close game 1-2.  Goal to Harry Singh

PF headed out to Yarra Valley and the points were split with a 2-2 draw.  Goals to Julian Pratt & Louis Carstens.

MMA & MMB headed to Mentone and came away with the points in both games.  Great to see the mix of young and not so young players out on the pitch bringing in some good results for the Metro teams.  MMA won 6-4 with goals to Greg Edwards, Jarrad Camille, Paul Hendricks, Mitch Swain and 2 to Jason Bloms.  MMB won 2-0 with goals to Damien Christidis and Jarrad Camille.