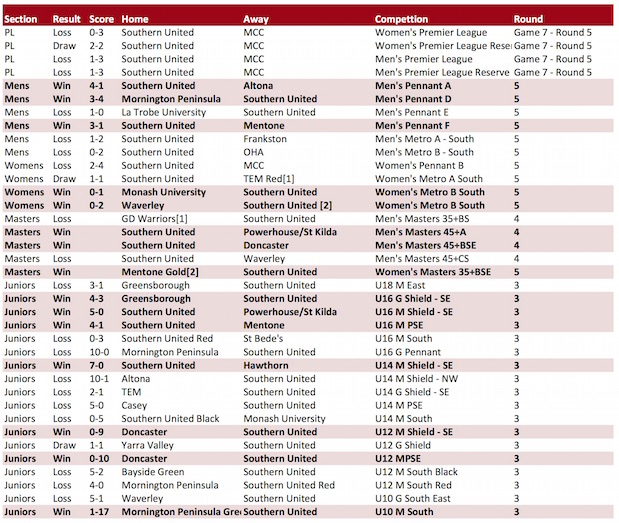 The junior hockey started at Farm Rd with the Under 14 mixed shield SE team, with two wins already for the season, playing Hawthorn. The Southern players with more experience and depth clearly took the points with a 7-0 win with Hawthorn only managing two shots on goal, with the goals shared around the team and two to Andre Fernandez. The 16 mixed shield team followed in a game against Powerhouse/St Kilda with once again Southern dominating with a 5-0 win. The under 16 mixed pennant team is continuing to really show the depth of the under 16s this year, with a 4-1 win over Mentone.

At Greensborough at 9pm the under 16 girls shield played a hard game for a 4-3 win with two goals to Zoe Stannus. The under 18s also played at Greensborough but sadly had their first loss for the season.

The under 14 shield girls with two great wins to start the season after a very tough practice match against TEM, bounced back against TEM at the hockey centre to go down 2-1. A great turnaround from 3 weeks previous. While the under 14 mixed shield NW team played a hard loss against Altona with Charlie Williams scoring the one goal.

At Brighton the Under 14 South team played unbeaten Monash to go down 5-0, while the under 16 south team had a 3-0 loss to St Bedes with Kurtis in goals making some great saves to keep St Bede’s to 3.

The under 16 pennant girls struggled against a strong Mornington outfit at Frankston & lost 10/0. With a side made up mostly of kids new to Hockey they did really well keeping out a number of other shots on goal.

On Saturday morning the under 12s had lots of players unavailable with the teams all spread out across Melbourne, logistics was the flavour of the morning. The under 12 pennant team trekked out to Doncaster for a 10-0 win, with the “new boys” Gabriel, Thomas, Alfie and Cameron bagging 7 goals between them – it is great to have you at Southern. The under 12 mixed shield team enjoyed the fun of the hockey centre for a 9-0 win over Doncaster with Lachie Paice once again scoring lions share with 6 goals. The under 12 girls bounced back after their loss last week for a draw against Yarra, probably helped by the funny hats training on Thursday night.

The under 10 girls played a strong Waverley side going down 4-1, while the under 10 boys played for a great win at Mornington.

The new stars of Southern, the 26 children taking part in the Northern Sharks Hockey League – 1/4 field games against Mentone and Bayside on Saturdays at 11.30, had another great day for the 3rd round of hockey. The warriors despite restructures are still showing their strength with children who picked up a stick for the first time in hook in 2 hockey really showing great skills. Thanks to all the parents and helpers that have stepped up to help with this great initiative. We have 8 new umpires learning each week, with coaches – parents, junior/senior players helping with the teams. A huge thank you to all.

The under 8s playing on a Friday afternoon are also continuing to grow in skills. Thanks also to their coaches leading the way with them.

WPL – Premier League Women were at home to MCC but never really got into their groove going down 3/0. Had some opportunities to get a closer result but just couldn’t find the net on the day.

WPLR – Premier League Reserves played the 2nd game at home & held a 2/1 lead when sustained pressure from MCC resulted in the dreaded last minute of the game opposition PC, which they scored from, resulting in MCC scoring the equaliser – 2/2 draw.

WPB – Played a strong, mobile MCC at Dendy st. and had goals scored against them early. The girls kept fighting back but couldn’t quite get the finishing touches to some good downfield work & had a 4/2 loss.

WMA – had some really good patches of play during the game, got a wake up call early going 1 nil down but fought their way back to square up the score. Had a number of scoring opportunities that went missing and finished level on 1/1.

WMB (Red) – had an away game at Monash & kept their winning form on track with a 1/0 win. A very good result for a team with a bit of player movement at the moment

WMB (white) – for our newest side two wins from two games. Played away at Monash vs Waverley and had a 2/0 win. Great result for a side that has a lot of 1st year senior players as well as a couple new to Hockey, being well looked after by some senior mentor players.

Our MPL teams hosted MCC on Saturday but weren’t able to take the points in either team losing 1-3 in both games.  In both games the guys were unlucky not to score more goals.  PL goal to Joey Kenny.

MPA took on Altona at the SNHC– after being 1-1 just before half time the guys put in another 3 to make it a 4-1 victory – some great team play in the 2nd half.  Goals to Jack Marquardt, Lachie & Liam Eddington, & Sam McLoughney.

MPD went to Mornington on Sunday in what looked like a nail biter.  The lead exchanged several times before SUHC came away victorious 4-3.  2 goals each to Jarnail Singh & Jesse Mulder.  Big thanks to John Leighton for helping out in goals.

MPE packed a lunch and headed across to La Trobe and were unlucky to go down 0-1 to the uni students.

MPF came away with the 3 points in a hard fought game against our Southern neighbours – Mentone. Goals to Stephen Georgeallis, David Fisher and Paul Hendricks.

MMA took on Frankston at home but Frankston came away with the 3 points winning 2-1.  Goal to Sam Waters.